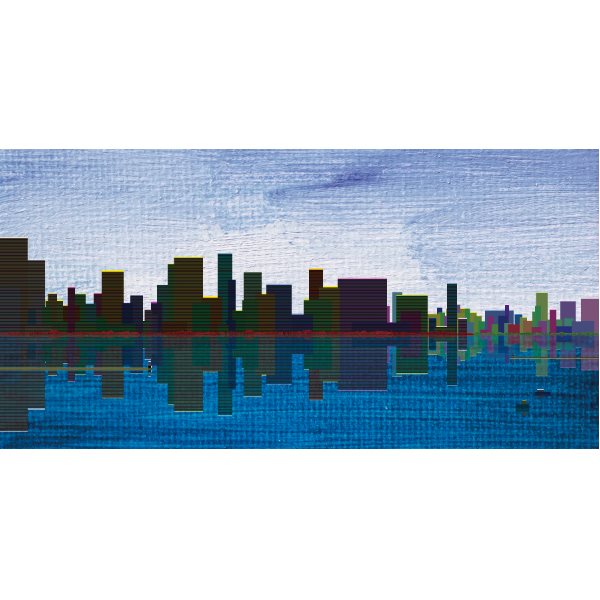 This is a digital artwork, printed by White Wall on an Ultra HD photo of Albon Dibond. This is one of the most professional and highest museum quality printing in the world.I combine oil painting and digital painting to create artificial urban scenery and non-artificial natural scenery. I use standard rectangles to represent all artifacts. They are crowded together densely. I use organic oil painting brushstrokes to depict the natural sea and sky. This work is full of contrasts, such as: crowded and soothing, artificial and organic, controllable and uncontrollable, colorful and monochromatic, etc.This artwork belongs to my series of solo exhibition Sensibility and reason.Sensibility and reason, one reflects the generality of animals, and the other reflects the special characteristics of human beings. How to judge and treat sensibility and reason is the inevitable way for a person to find himself. Looking at the lives of contemporary people, people are tirelessly categorizing people with reason and sensibility labels; throughout history, people who support the two different views of materialism and idealism have attacked, criticized and discussed each other endlessly. The relationship between idealism and materialism in metaphysics is like the relationship between macro and micro physics in the field of physics. They are self-consistent and effective in their own fields, but they are never compatible. A brief look at the entire history of human belief is actually a process from sensibility dominance to reason dominance. At the present, science, as the most successful belief in human history, has pushed the influence of materialism among the masses to the highest point.The exhibition of Sensibility and Reason is the opening chapter of a series of solo exhibitions of mine. It can be regarded as a solo exhibition or alternatively as one piece of a series of works. I want to show my views on sensibility and rationality through a series of solo exhibitions. The sequence of this series of solo exhibitions is also the same as the history of human development. Starting from the ambiguous separation and unity between sensibility and rationality, it moved to the criticism of sensibility, and then proceeded to the criticism of reason that is happening now and will be heatedly discussed in the future. The final topic is the limitation of human beings.

WEIGHT (KG): 4.00
Artist: Cui, Decheng
Year: 2021
Region: U.S.A
Size: 48 x 24 x 1.5 in
Support: Other
Keywords: This is a digital artwork, printed by White Wall on an Ultra HD photo of Albon Dibond. This is one of the most professional and highest museum quality printing in the world.
NFT Included: Yes (Fulfilled by Digiphy)
ADD TO CART