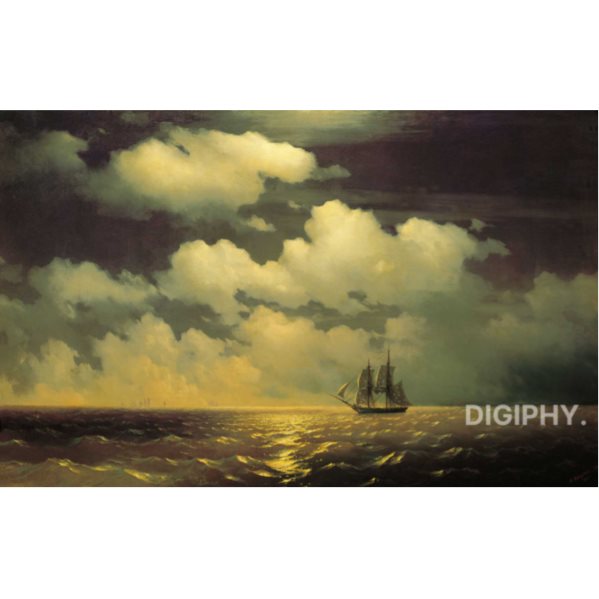 Ivan Konstantinovich Aivazovsky (Russian: Ива́н Константи́нович Айвазо́вский; 29 July 1817 – 2 May 1900) was a Russian Romantic painter who is considered one of the greatest masters of marine art. Baptized as Hovhannes Aivazian, he was born into an Armenian family in the Black Sea port of Feodosia in Crimea and was mostly based there. Throughout his lifetime, Aivazovsky contributed over 6,000 paintings to the art world, ranging from his early landscapes of the Crimean countryside to the seascapes and coastal scenes for which he is most famous. Aivazovsky was especially effective at developing the play of light in his paintings, sometimes applying layers of color to create a transparent quality, a technique for which they are highly admired. This piece “Meeting of the Brig Mercury with the Russian Squadron After the Defeat of Two Turkish Battleships” is one of Aivazovsky's best known works. This reproduction of his work has been digitally enhanced by our proprietary AI algorithm for an ultra high resolution canvas reproduction that is available in our Standard size. For reference, our Standard canvas sizes range from 20" to 30" in dimensions. The final product is custom adjusted to ensure an accurate museum quality representation of the original piece that can last for up to 200 years. Includes Free Shipping across North America!