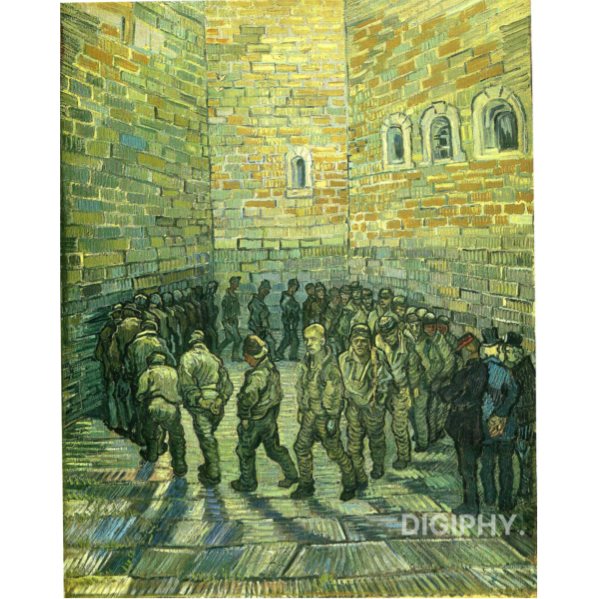 Vincent Willem van Gogh (Dutch: [ˈvɪnsɛnt ˈʋɪləm vɑn ˈɣɔx] ( listen); 30 March 1853 – 29 July 1890) was a Dutch Post-Impressionist painter who is among the most famous and influential figures in the history of Western art. In just over a decade he created about 2,100 artworks, including around 860 oil paintings, most of them in the last two years of his life. Van Gogh generally considered the greatest after Rembrandt, and one of the greatest of the Post-Impressionists. The striking colour, emphatic brushwork, and contoured forms of his work powerfully influenced the current of Expressionism in modern art. Van Gogh’s art became astoundingly popular after his death, especially in the late 20th century, when his work sold for record-breaking sums at auctions around the world and was featured in blockbuster touring exhibitions.This piece “Prisoners Exercising (Prisoners Round)” is one of Van Gogh’s best known works. This reproduction of his work has been digitally enhanced by our proprietary AI algorithm for an ultra high resolution canvas reproduction that is available in our Standard size. For reference, our Standard canvas sizes range from 20" to 30" in dimensions. The final product is custom adjusted to ensure an accurate museum quality representation of the original piece that can last for up to 200 years. Includes Free Shipping across North America!