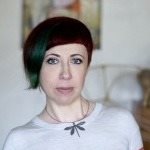 Yevgenia Nayberg is a painter, illustrator, and stage designer. A native of Kiev, Ukraine, she graduated from The National School of Arts. Yevgenia’s paintings have been featured in solo exhibitions in New York City, Miami, Los Angeles, and Moscow as well as in numerous international group art shows. She designed sets and costumes for over 40 theatrical productions and received a number of prestigious awards for her stage designs. Her award-winning illustrations appeared in magazines and children’s books as well as on album covers, book covers, and theatre posters. Yevgenia lives in New York City.